Space dust into precious metal: managing research and development for the big and small

Thursday night’s PMI event was an exercise in perspective. One of those event where the macro meets the micro at the horizon.

Our two speakers, former colleagues and longtime friends, prepared and delivered a joint presentation on what Research and Development can look like in a nascent star (DBS System, medical devices, Lausanne), and a dwarfing red giant (Nestlé).

With such different constraints, one needs no telescope to see that making your own space requires a different set of skills, processes, and people than maintaining internal fusion in a massive reactor. But just how does that happen in practice?

To channel the need for innovation, our two speakers showed the way in which time-tested management wisdom had its place, but how continuous adaptation and agility shaped their lives. In doing so, they could draw a parallel across scales and fill the vacuum that separates their position with precious insight.

This insight triggered robust discussion late into the evening between new and regular attendees alike, making me look forward to the coming programme of events.

The educationdigital.ch portal, launched this month, brings together various Swiss institutions offering digital transformation courses in 4 languages. Project management courses are on the list as well. How far have we come in transforming our profession?

September's PM Network features use of AI and Machine Learning in Project Management. We can read that we need good data to have good outputs, keep learning to make good use of new technologies and we do still do not want let machines decide alone for us. There are some obvious use cases such as resource, risk or capacity management. However we are still in the early days compared to HR digital sourcing. In a globalized world where everyone can apply to any posted position anywhere in the world one way of dealing with thousands of applications is the use of the digital tools to select certain number of candidates. Another is to use the digital tools to proactively find new talents. Next stage are resourcing platforms that will be proactively sending notifications to HR professionals with profiles that may interest them. But what about exceptions and special cases?

Digital tools depend on data quality and quantity and exceptions will never be accounted nor there will be enough of them  we could use for machine learning. These will still need human interaction and intervention. There will be time that our projects will be all planned and set proactively by the digital tools. Our role will be to audit them making sure that all elements have been taken into account. Human interaction will be even more important as well as managing exceptions and special cases. With the tools to take care of the activities that can be automated, we will have more time to be with those who will need our help and guidance and focus on the activities that will require our attention. Let’s make good use of these tools and move into the digital future.

Life Science Zurich Young Scientist Network(LSZYSN) is a non-profit organization created and run by a group of graduate students & post-docs of the University and the ETH Zurich. They aim to contribute to the local and global life science community by bridging the gap between academic research and industry. They host events like Zurich Life Science Day, Career chats, Company visits, and Life Science Week to allow young scientists to learn more about the biotechnology and pharma industry.

Managing their scientific research projects and the events at LSZYSN, they face numerous challenges in project management, such as leading the team, holding productive meetings, and giving feedback. Our workshop aims to equip the students with the essential tools and techniques for making their projects successful.

We first explained some key concepts in project management and then we focus in-depth on leadership and communication. 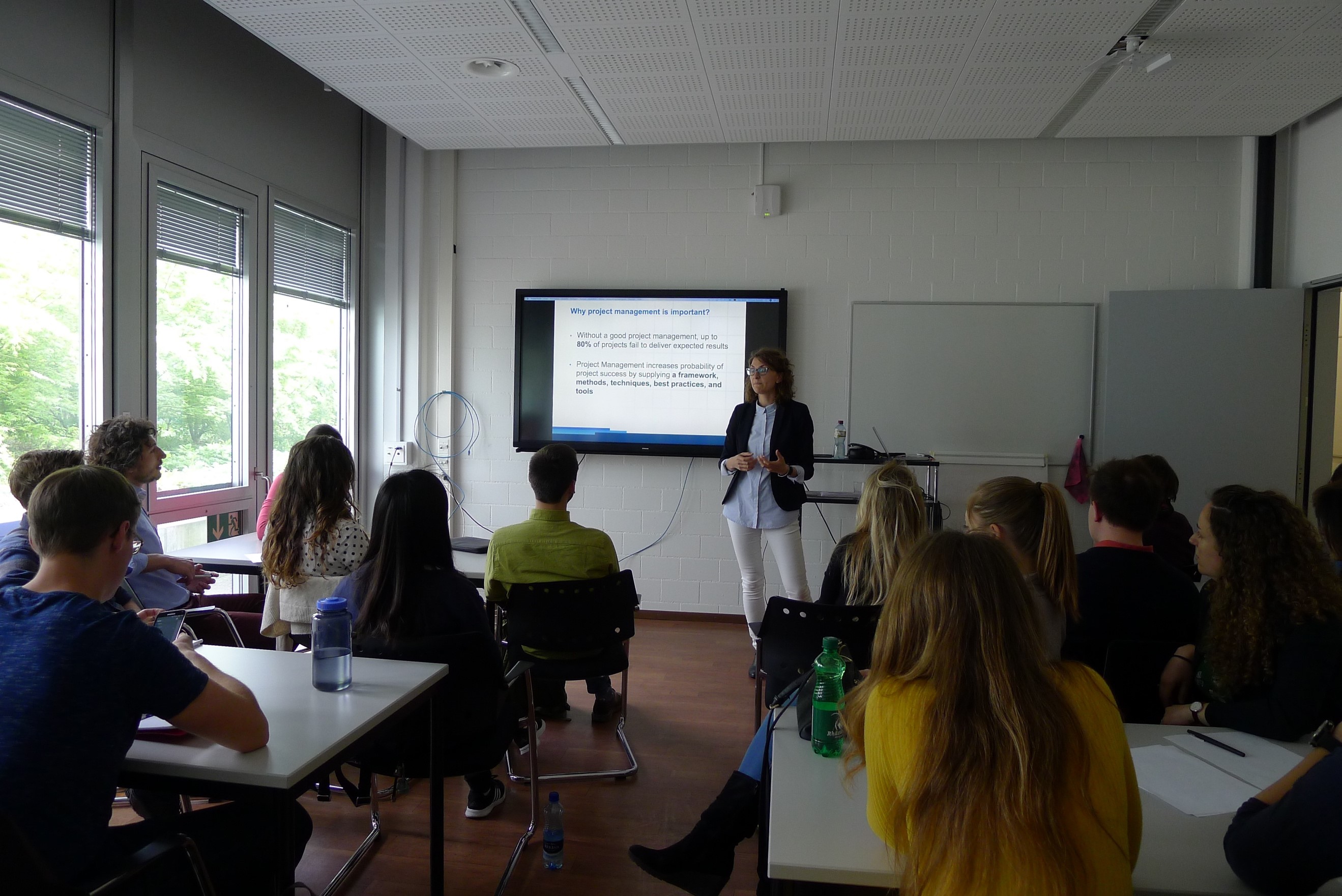 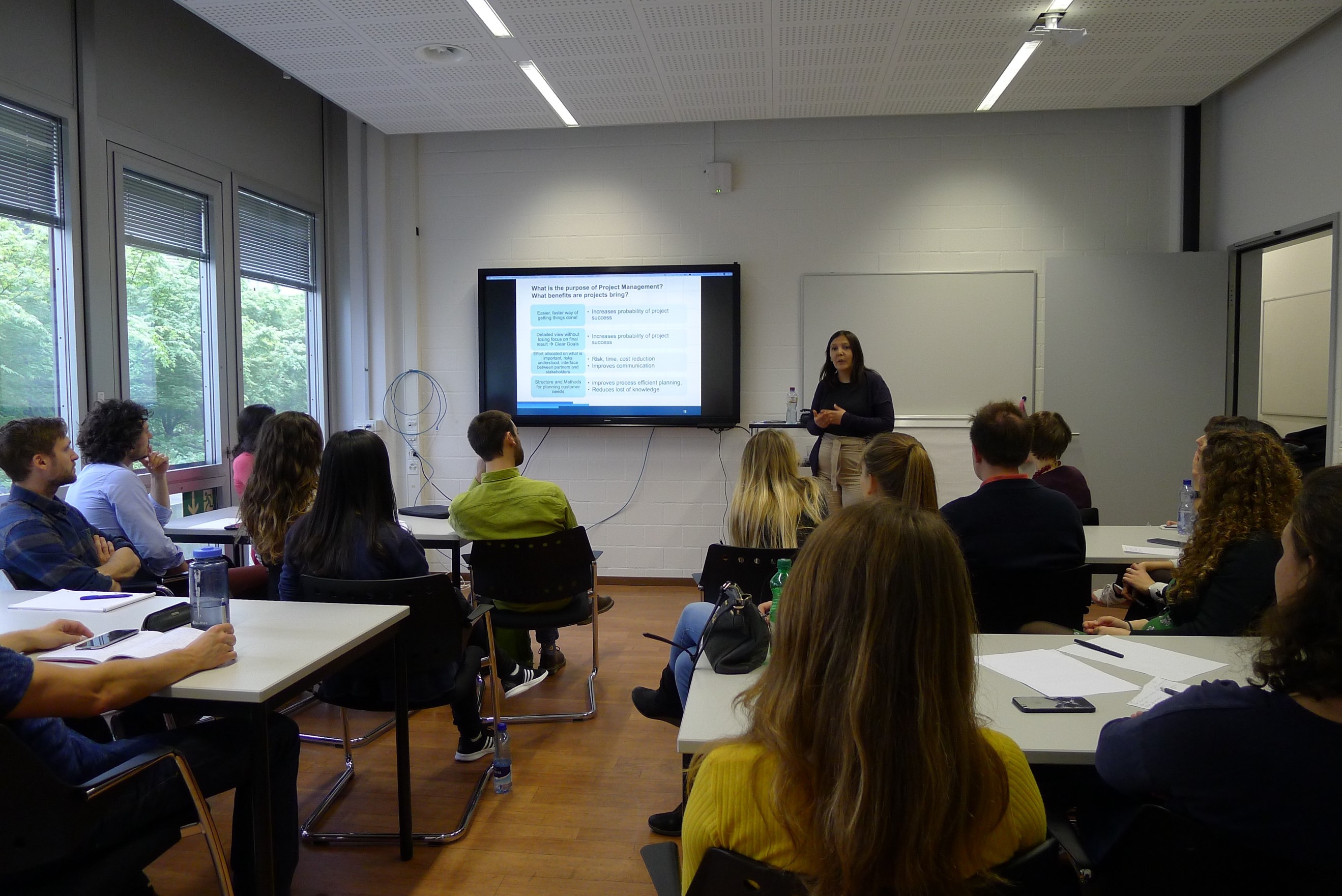 After we discussed the theory, the students had the chance to practice what they learned by doing some hand on exercises. One of the most striking activities is "Find the ball", where the students need to find a hidden ball according to different feedback styles, for example, the silence feedback, the only positive, the only negative and specific feedback. The feedback givers got to experience the effect they have upon the receiver. The take-home message was clear: only the student receiving specific feedback was successful in finding the hidden ball.  This powerful illustration also showed the students, how feedback could affect performance and to never be shy to ask questions when they are at the receiving end. 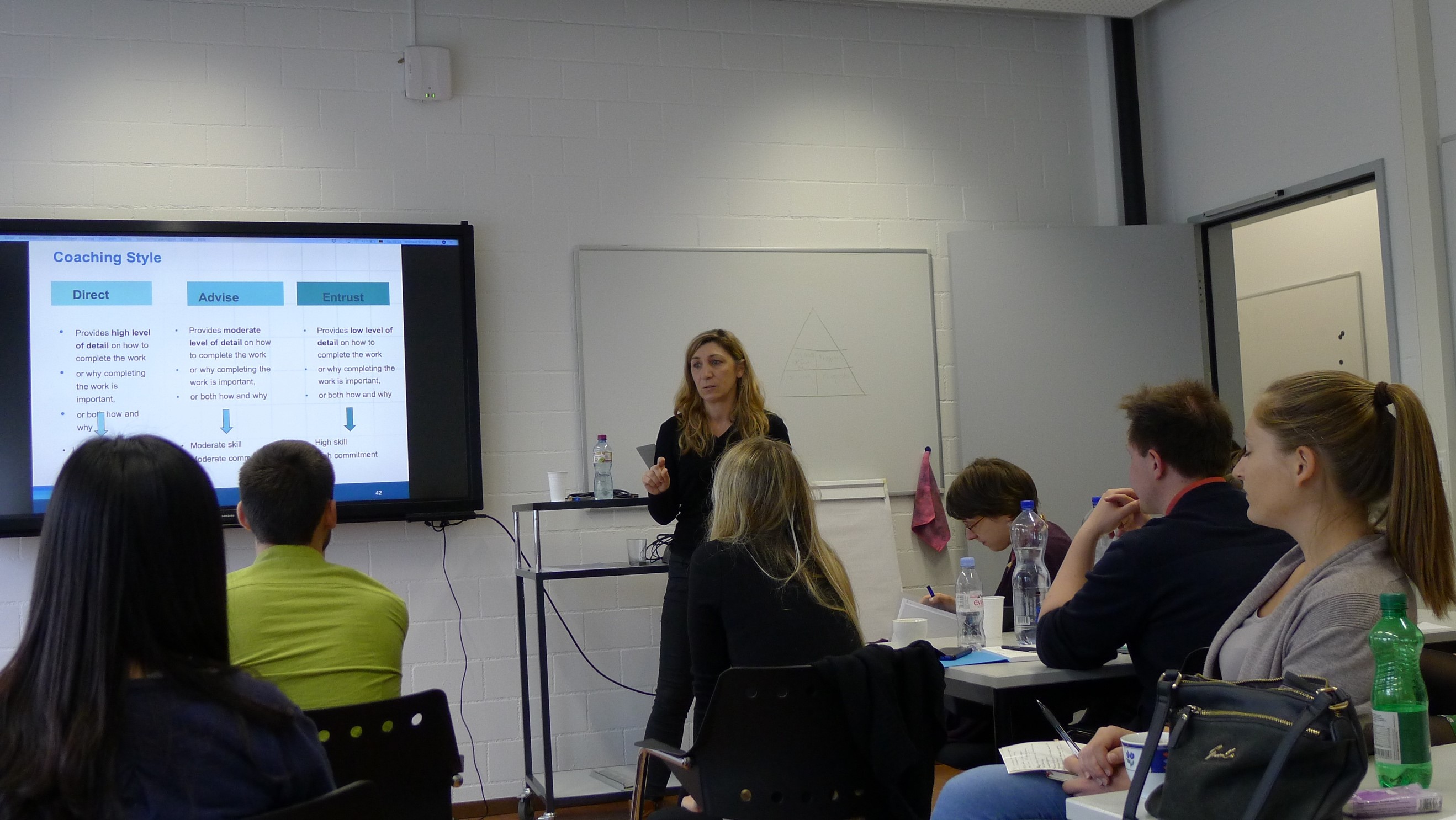 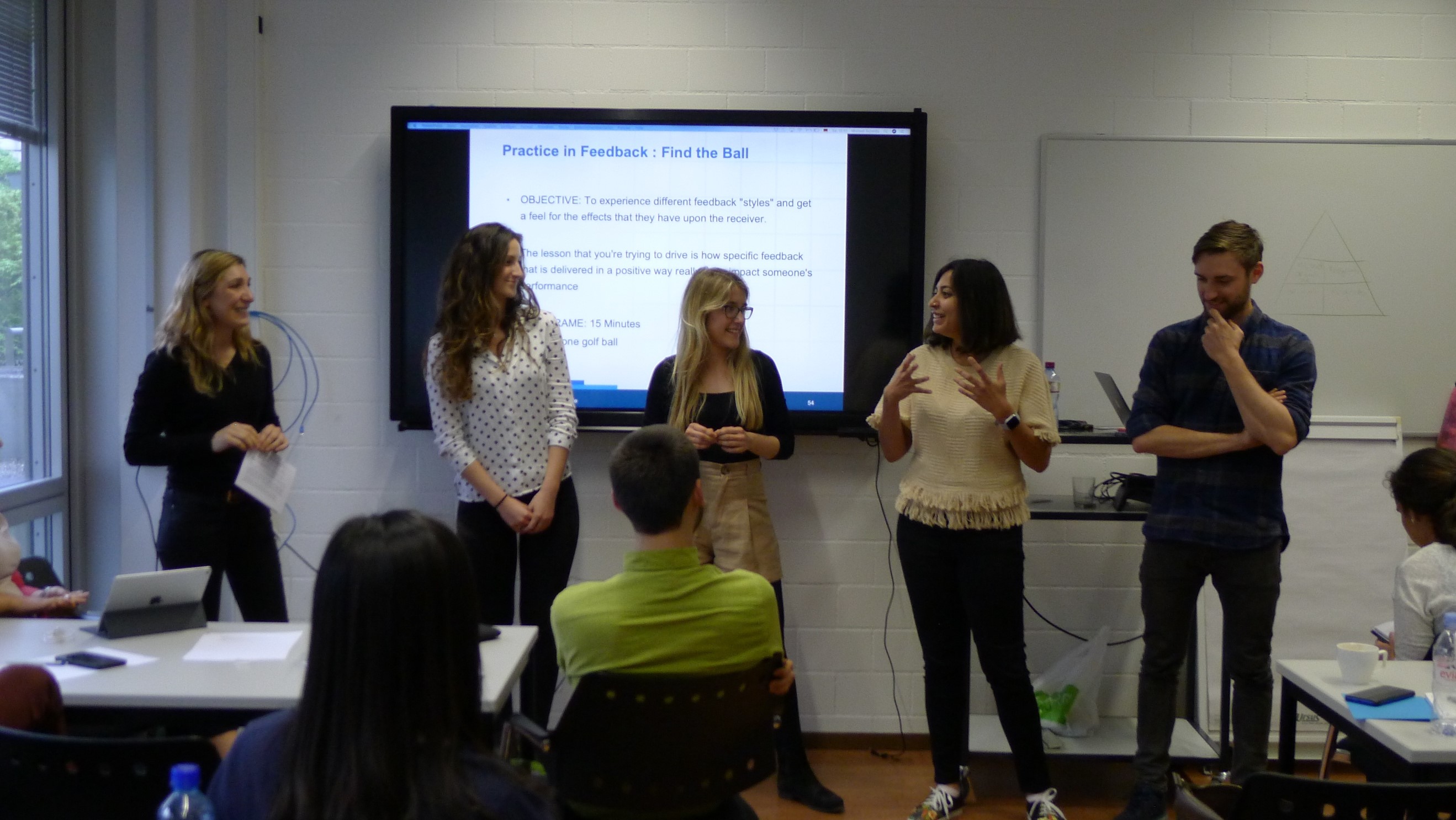 Moving on, we have covered more on team dynamics, including personality, cultural influences and conflict resolutions. Finally, the students put into practice what they have learned by competing in the tower game (freely available on PMIEF website, pmief.org).  We are always amazed by the creativity of students with simple materials like plastic cups, bamboo sticks. To conclude the day, we reflected on their ah-ha moments and things they would start implementing in their projects. 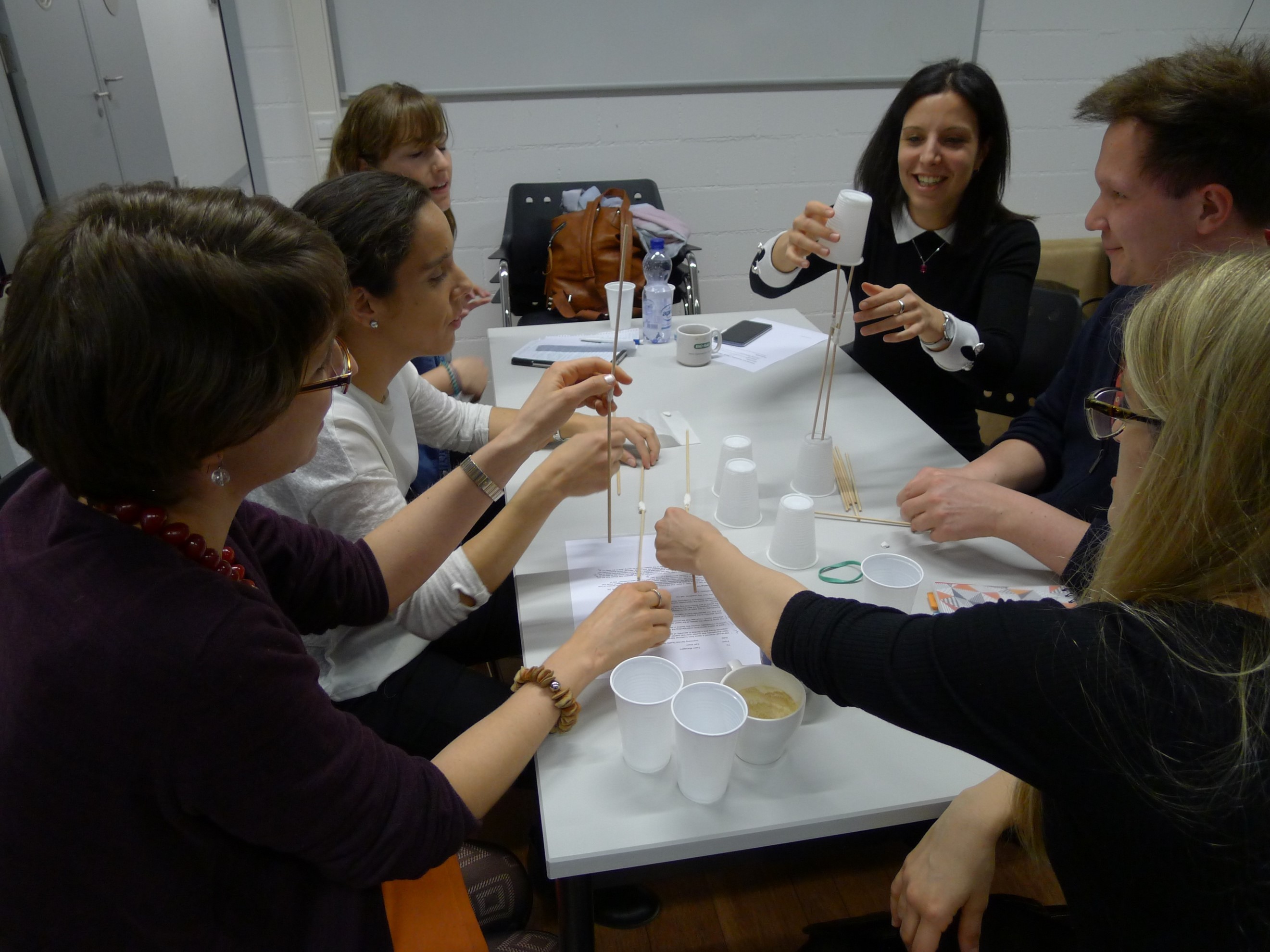 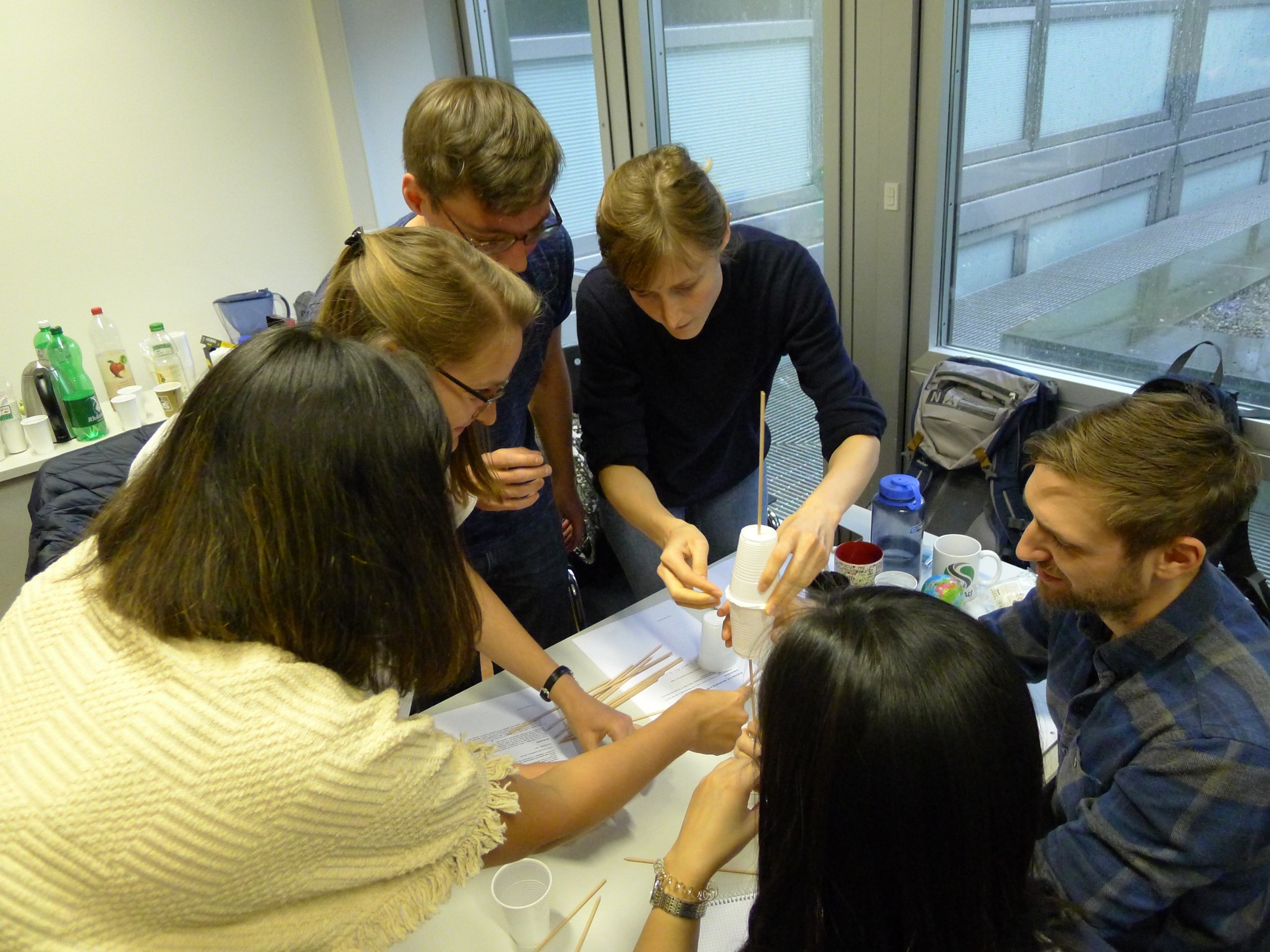 “When we listen and celebrate what is both common and different, we become a wiser, more inclusive, and better organization” – Pat Wadors, Chief Talent Officer at Linkedin

I was roaming around a store in Japan, when I saw a child crying profusely. He seemed to have lost his mother in the store. I stopped and was about to ask him his mother’s name when I saw a woman rushing my way. With her half-terrified half-relieved looks, it didn’t take me much time to realise that she was the child’s mother. Holding her child’s hand, she bowed deeply and said, “Sorry. I am really sorry for all this!" I was somewhat taken aback, because “Sorry” was the last thing I had expected. Generally, in such a scenario, we expect a person to say “Thank you”.

After working in Japan for a long time, I gradually came to learn that it is implicit of their culture. In the above scenario, the woman was blaming herself for her carelessness and causing inconvenience to me and others, who were affected by the crying of her child. Therefore, out of embarrassment, she bowed several times and apologized.

I am of the belief that only those who understand culture of their customers, can forge a better path towards achieving higher customer satisfaction, which in turn translates into better business.

If you have Japanese people working in your team or you are working with a Japanese customer/vendor, then this article is for you!

Given below are two highly prominent cultural foundations observed in Japan, which are very different from the ones followed by those in Germany. Many other cultural aspects such as Honne and Tatemae (True feeling Vs Face displayed in public), Loyalty and Trust, Reluctance to say No, Concept of Wa (Harmony), Time-consuming decision-making, Non-verbal communication, are derived from these major cultural foundations.

Japanese drive their identity from group affiliations. A ‘Group’ implies the family a person belongs to, his school, college and the working space. They respect the groups they are associated with, its opinions and decisions. The biggest example of this is, whenever a Japanese person introduces himself for the first time, he takes his company’s name first and then his family name. For example, if a person’s name is Shio Tanaka and he is working for Sony, then he will say, I am Sony’s Tanaka. Further, when a Japanese person hands over his business card to you, make sure to show respect to the business card by not keeping it in the back pocket of your trouser. Always keep them in the pocket of your shirt or if you are attending a meeting with him, then keep it in front of you on the table.

This is also one of the reasons Japanese people are so attached to their companies, that they spend their entire lifetime with one company and rarely switch jobs. Though, this trend is seeing a change of late.

Japan is a hierarchical-driven society. Hierarchy is driven by ranking, ranking is based on seniority, and seniority is decided based on one’s age. There are very strict rules that a Japanese person needs to follow to show respect to his senior, the foremost being using polite words.

If a consortium of Japanese comes to visit your office and you are confused which one is the senior most person, then you can take cues from the following:

So, Group Work and Respect for Seniority are the two most important aspects that drive the whole of Japan. But, this is not all. If you are really interested in doing brisk business with Japanese customer, you need to go out and make efforts to understand and learn a lot more about various aspects of the Land of Rising Sun that makes it so unique from other GEOs.

Page 8 of 27
We use cookies to ensure that we give you the best experience on our website.
I accept