Indeed, there were 300 hits on the three options (Green, Amber and Red) that gives a very high rate given the number of views and distribution emails. Thank you very much to all of you for your participation!

The results are essentially one third on each category. We are analyzing the comments given and trying to adapt our Newsletter delivery to fit better the expected quality and formats by our readers.

We have several options open to make changes and aim for a better experience. If we examine the results we see that one third of the feedback is unhappy with the current Newsletter and they would like us to change it. That's very important feedback for us. We put a lot of effort in to deliver a valuable newsletter to your inbox every month, gathering content, organizing ourselves and creating this customized email. If the readers are not happy with the content or the format, we need to improve to satisfy these expectations, otherwise our efforts are not justified.

At the same time, two thirds of the feedback are happy with the current newsletter. Half of them would like to do some changes, and the other half is fully satisfied! It was a great positive feedback, as we mainly hear the negative feedback of those who are not happy. This was the first time we could put things into context, going away from personal preferences to a readership-wide view.

Even if the results are mainly positive, we take the opportunity to see what could be improved. We target to make this request for feedback again and see how we expand the positive feedback statistics.

There are two ways YOU can help us improve both format and content of the newsletter: send us your article proposal to This email address is being protected from spambots. You need JavaScript enabled to view it. or get it touch with a subject that you would like to write about (related to Project Management, of course!). And you can also send us sugestions of what we could improve or do differently, we do not need to wait until the next feedback check!

Again, thank you so much for all this feedback, it means to us you care about the newsletter, and it makes our effort worth the time spent!

This is also the time when project managers should be very active in sharing their view and insights on how these new projects should be set up and run. This aspect of the business analysis is often ignored and project managers are just simply assigned to projects without a deeper understanding of the environment or required resources and with an estimated project budget. Project managers may even find themselves looking for the project sponsors in the organizations with weak project management governance.

It is a big challenge to meet business expectations of delivering on agreed business objectives in terms of cost or time without committed resources and motivated stakeholders.

This can be mitigated if project managers are consulted in the initiation phase as they can, using their experience, highlight potential risks, help in establishing realistic business targets, engage stakeholders and influence business decisions.

Early engagement in future projects is often the key to their success.

At the end of August, we had a great event in Geneva with a well known Swiss top Manager: Benedikt Weibel.

He excellently described how he turned the Swiss railway (SBB-CFF-FFS) around and the lessons learnt on big projects like Rail 2000, the Euro2008 football project and the WESTBahn. 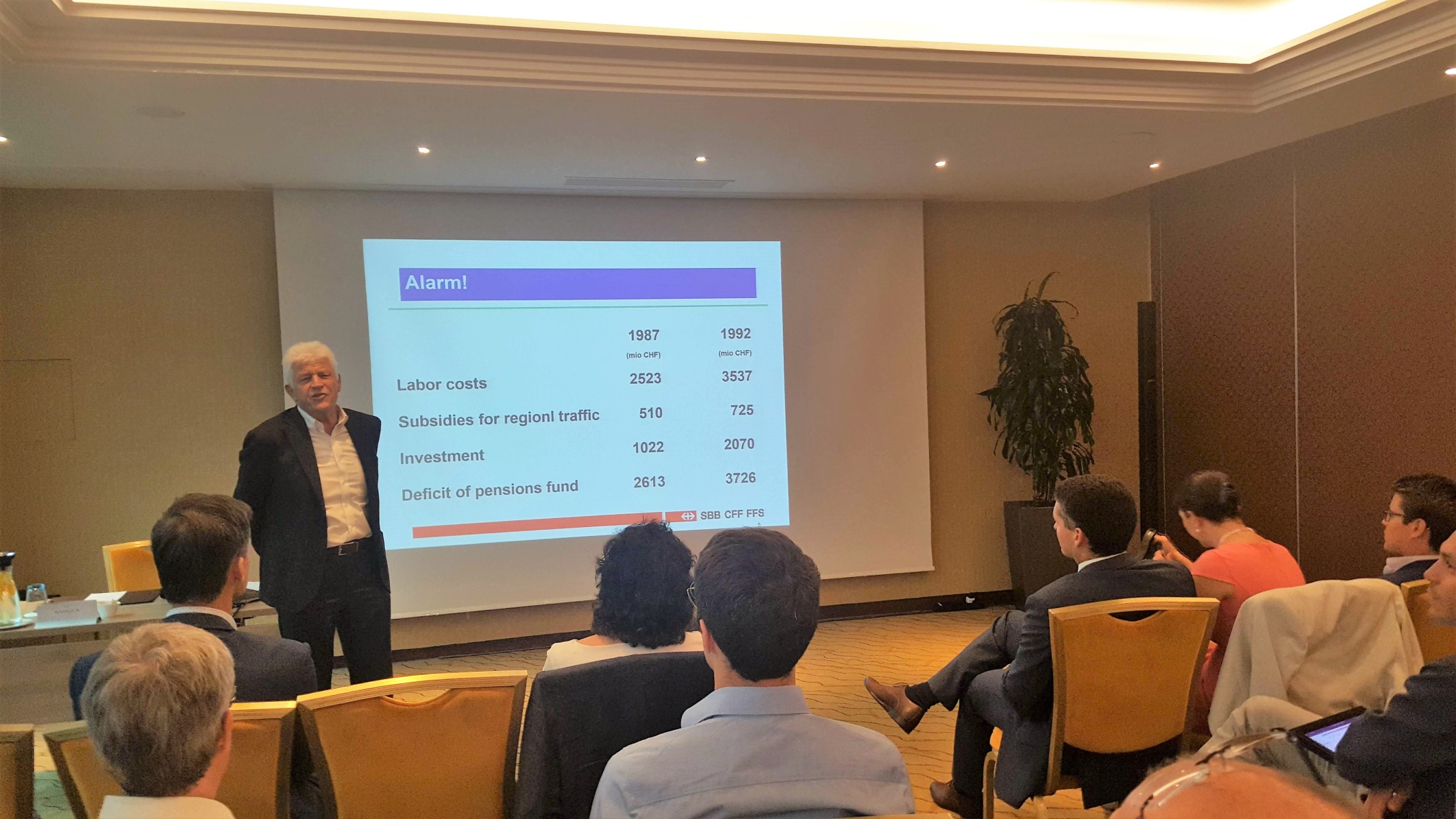 He faced many disasters during his CEO years at the Swiss railways, including dead and injured people, large chemical incidents, and that put safety as a priority. KPI number of accidents per 100 employees dropped from 11.4 to 4.8 along his years as CEO. Do you know which day of the week are these accidents more frequent? Mondays! Attention is a key aspect to prevent accidents.

Benedikt created a Tour de Suisse to engage into a dialogue with the ten thousand employees. The result was the reduction of the power distance (the authority as CEO versus employees) and it was his way to better understand the "morale of the troops". His advice is to eliminate the filters as bad communications are always filtered by middle management. 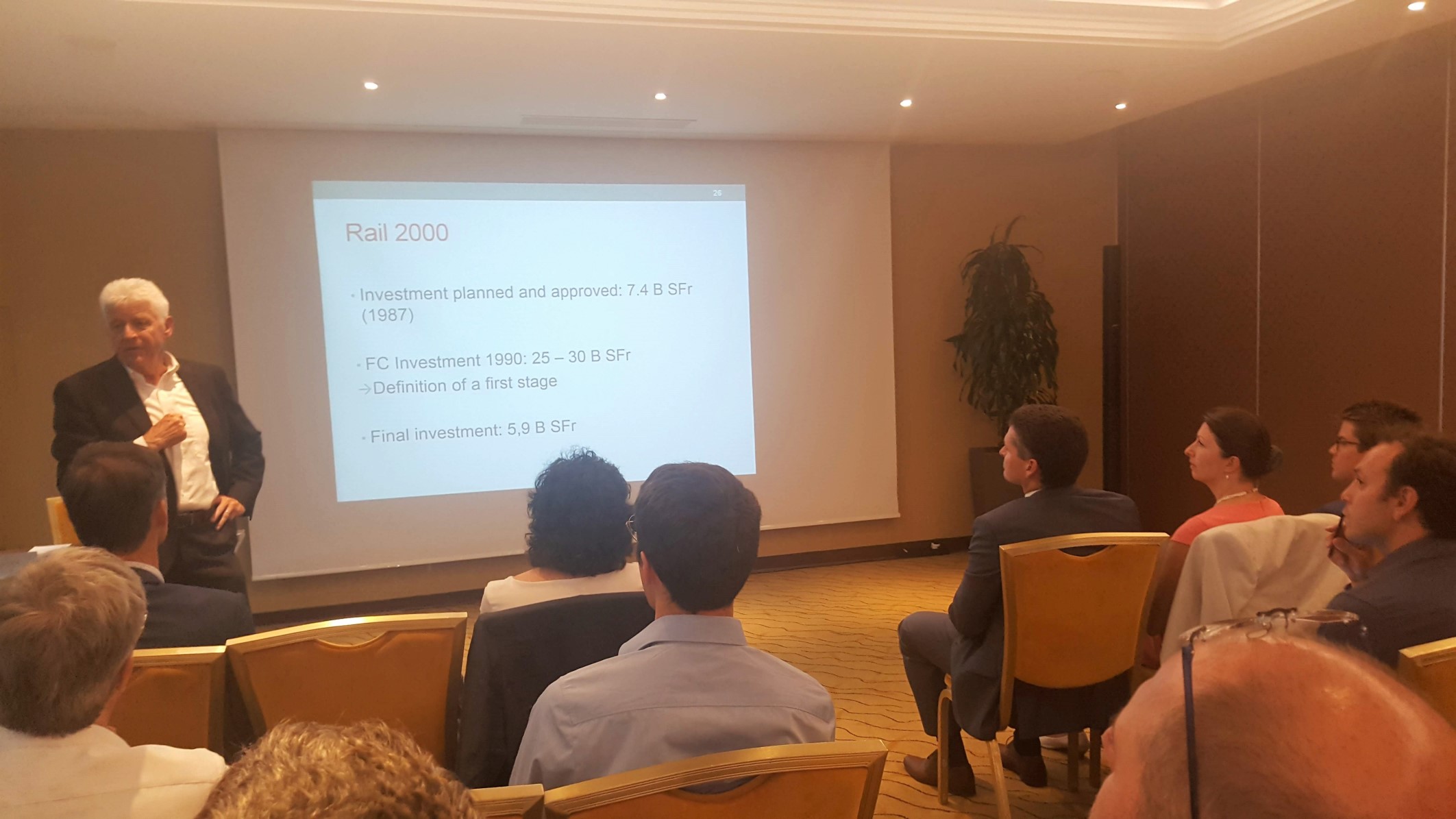 He talked about poor leadership (leadership by anxiety and fear, using the boss authority), also about management principles, and eleven points on lessons learnt. He illustrated all those lessons with concrete examples from the Rail 2000 flagship project (On December 12, 2004, a magic moment, a big bang with a new timetable during the first phase of Bahn2000), from Euro2008, and from WESTBahn.

We learnt how much anticipation is key, and undoubtedly it is as well valid for our own projects, for every risk they had though a mitigation. But sometimes, bad luck, the risk that materializes is not on the risk register. On June 22, 2005, a short circuit on a long-distance power transmission line in central Switzerland led to a chain reaction. The entire Swiss Federal Railways network was out of service during rush hour. 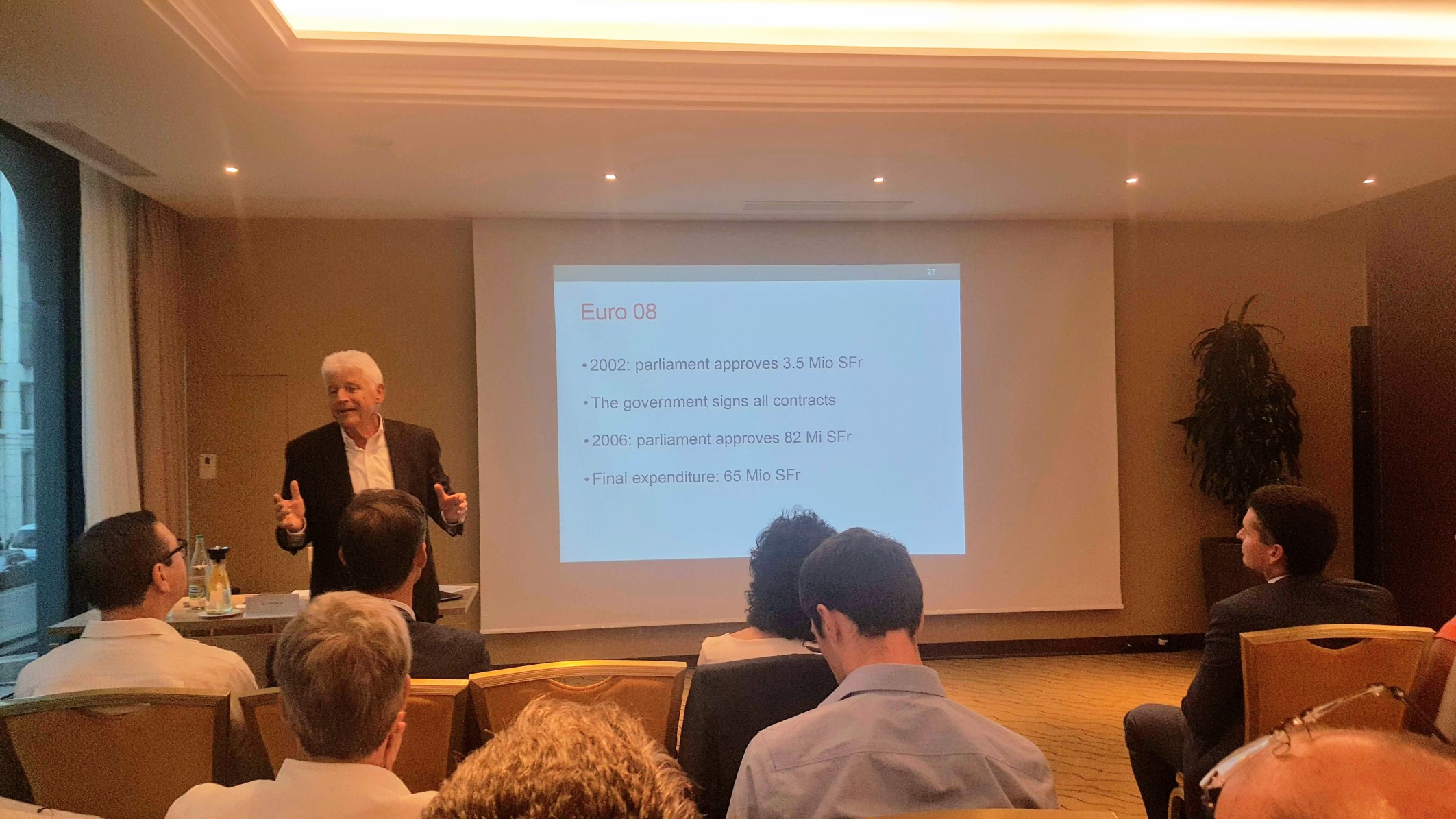 We learnt how important is to define a last point of return, because you must be able to stop projects. And to install reserves in the business plans, that are always wrong, simply because it is about the future (that we do not know!) and there are too many parameters and complexity (sensitivities in these parameters can change the case completely). 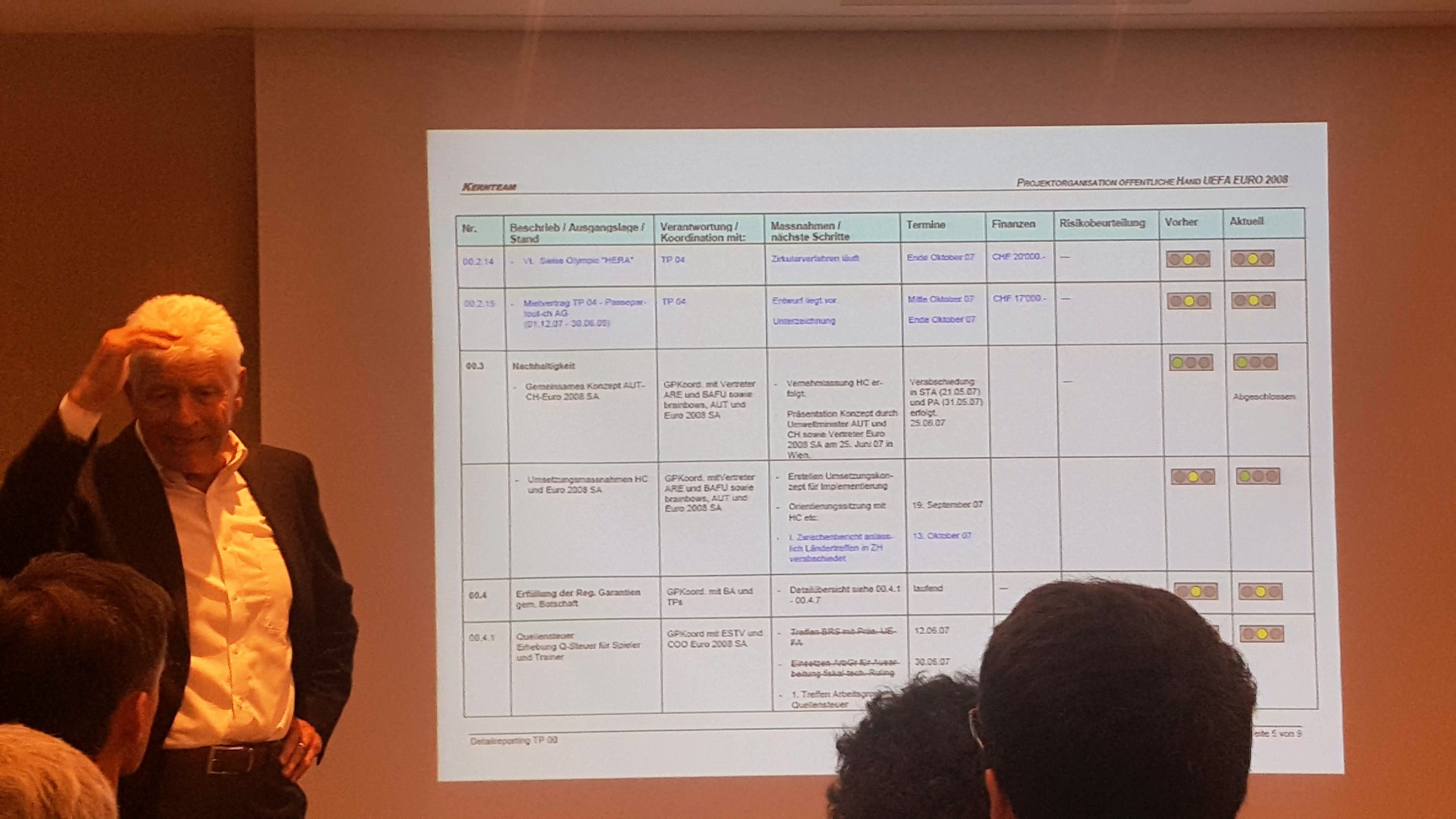 It was a great event, very well organized and we had the opportunity to appreciate lively thoughts during the networking session that followed.

Today’s communications are mainly performed through Social Networks. Most of us are users of these networks to communicate to our friends, family, colleagues and business partners. These communication tools require, as any other tool, some training and get to know the best practices. 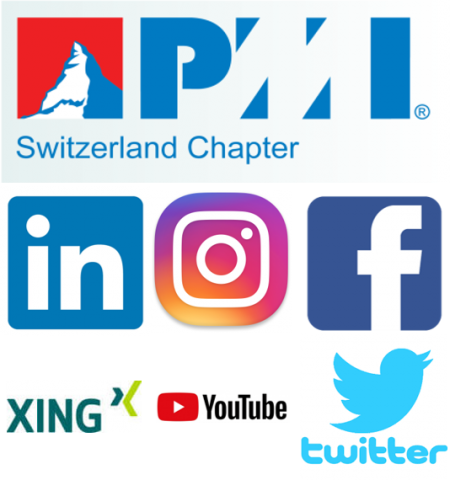 Members and volunteers of the PMI Switzerland chapter can attend the dedicated upcoming Social Media Guidelines online training webinar that was put in place by the Marketing & Social Media team.

We target September for the webinar to be available!

The goals of the free-of-charge webinar are to inform members and volunteers on PMI Digital & Social Media Channels, to train them on how to communicate and post correctly all PMI related events, news, workshops, etc respecting our new social media guidelines.

The registration link will be available soon on our social media channels. Stay tuned!

In July edition you may have noticed a new section for extended Get to Know articles in our monthly newsletter, presenting an interview with Dr. Andrea Behrends, our first president in the PMI Switzerland Chapter.

I would like to take this chance to explain the idea behind this new initiative and ask for candidates who would like to be presented in this new section in the upcoming newsletters.

Most of you are aware of the Get to Know concept where we welcome our new members and new certificate holders and give them a chance to introduce themselves to the PMI Switzerland Chapter community.

Nevertheless, this is only a start for a long journey in the chapter and as time passes, valuable experiences are build up differently for each of us. With the extended version of the Get to Know, we would like to give the opportunity to our members to speak about their challenges in the Project Management profession, ideas about the evolution of the Project Management role over the coming years, their experiences in the PMI Switzerland Chapter and foresights for the further development of the PMI and Swiss Chapter.

The volunteers to participate in this section will be either interviewed face to face during the chapter events or remotely by telephone or e-mail depending on the availability and personal preferences.

If you are interested to participate in Extended- Get to Know , please send me an e-mail at This email address is being protected from spambots. You need JavaScript enabled to view it.

Page 12 of 26
We use cookies to ensure that we give you the best experience on our website.
I accept