Project Managers spend 90 percent of their time communicating based on what many books state and based on the everyday experience. They communicate with many stakeholders such as the sponsor, project team members, business and procurement departments. In many cases conversations are easy and pleasant, working for the same goal is exciting and fulfilling. However, sometimes they might be challenging and risky, especially when things do not go as planned and the budget is running short, or the scope starts expanding.

I would like to offer some tips I've gleaned from the book Crucial Conversations on how to handle critical conversations. The most dangerous risk is to avoid them, in one way or another troubles will come and find us unprepared! That’s what I used to experience when I was at the beginning of my career. Another option is to face them and try to handle them well. 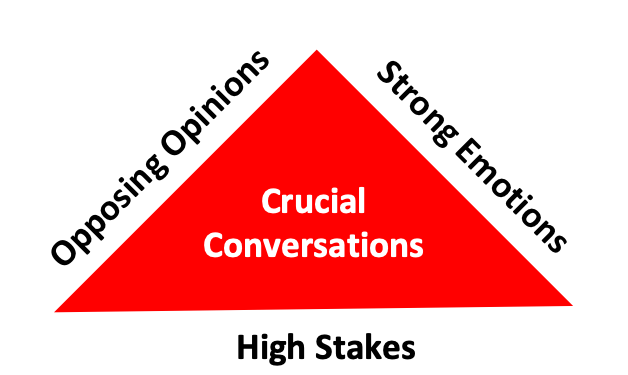 When approaching a critical conversation, the first thing to do is to appreciate the value of dialogue and think of it as an opportunity to get as much information as possible to make good decisions. It is the starting point to elaborate and analyze options to come up with the solution. Useful takeaway for project managers is to always step in to facilitate meetings to gather any kind of information, especially when the situation is not clear.

The second aspect is to focus on the real problem, instead of focusing on fixing other people. How many times do we deal with colleagues or clients that are so different from us? Sometimes we have the impression that they manipulate us or they behave in a selfish way. Consequently, during the conversation our effort is mainly concentrated to protect ourselves from them, instead of solving the real problem. During critical conversations let’s not slip away from the goals we have set but, instead, let’s stick with them and focus honestly on what we really want for ourselves, for the other person and for the project.

Another important aspect is to look for signs showing us that the dialogue’s safety is at risk. When stakes are high and emotions become strong, it is easy to lose focus on the main topic of the conversation. Silence and the raising of one’s voice are evidence that emotions are taking over and they might go down an unsafe path. In essence, we cannot control others but we can control ourselves.

During conversations, we should pay attention to what happens between the moment we feel something, because of the other person’s action, and the moment we react. What do we feel? And what do we do next? Between the two actions we should be careful on how we interpret the situation, we tell ourselves a story that sometimes does not correspond to reality. For example, during the project status meeting, the boss steps in and makes decisions on a particular issue. Is that because he or she does not trust us or is that because the issue has become so important that it has to be escalated to sort things out?

Now we are probably at the most important part of the article. Dialogue is a useful process to get as much information as we can but, at the end of the day, we have to make a decision, otherwise the conversation will end up fruitless. There are four common ways to make a decision: command, consult, vote and consensus. The decision on which method to choose has to be made based on who wants to be involved, who has the expertise on that specific topic, who has the influence to decide (and therefore may be better to involve) and the number of people that should be involved. And finally, after the decision is made, good project managers make sure that tasks have been identified and they have been assigned with due dates.

In the end, project managers must appreciate the value of dialogue, as it provides useful information to make a decision. They have to safeguard the conversation when the risk of slipping away from the main goal arises, being able to make a final decision and put it in action.